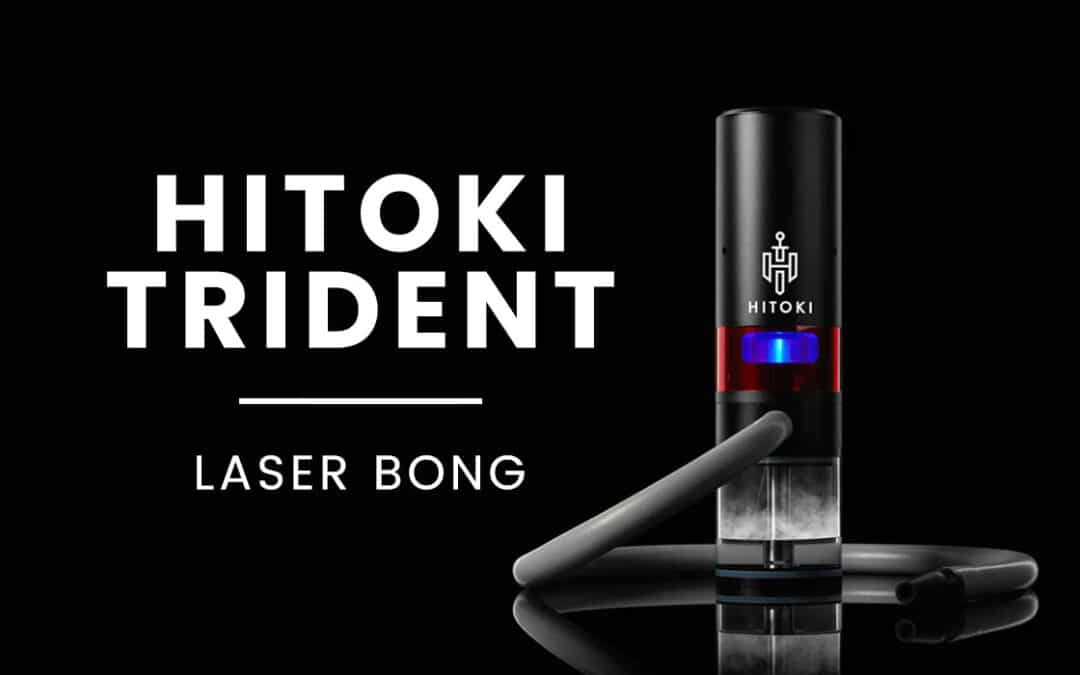 Should you buy the Hitoki Trident?

If you have a couple of extra dollars lying around the house that you’ve been wanting to ‘burn’, then the Hitoki Trident laser bong is something that you should bring your attention to. Bringing new technology to the age-old concept of bongs and lighters, the Hitoki Laser seeks to breathe some fresh air into the industry by having a ‘freakin’ laser’ as the source of ignition of the dry herb in the chamber. With a viewing window that glows blue with the pulsing laser, there is also a certain eye-candy element, as the minimalist eye design looks just as awesome on a shelf as it does in use. In this review of the Hitoki Trident, we’ll be going over the bong’s key features to help you decide if it’s worth the $500 USD investment or not, as well as comparing it to some of the best desktop vaporizers in the cannabis industry. 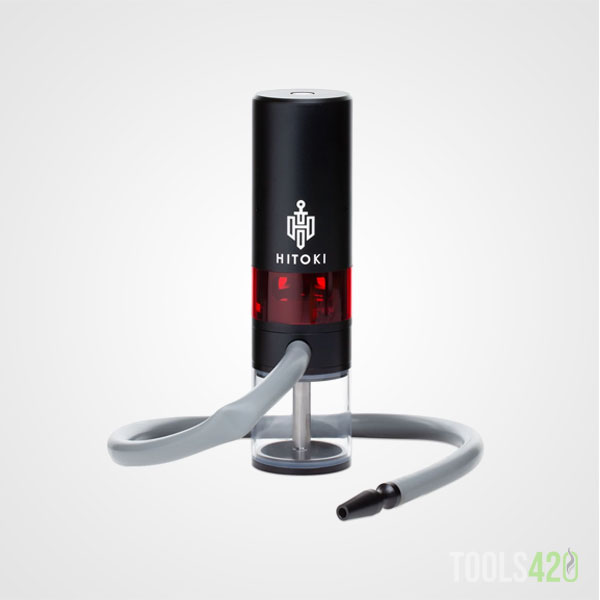 What’s in the Hitoki Trident box? 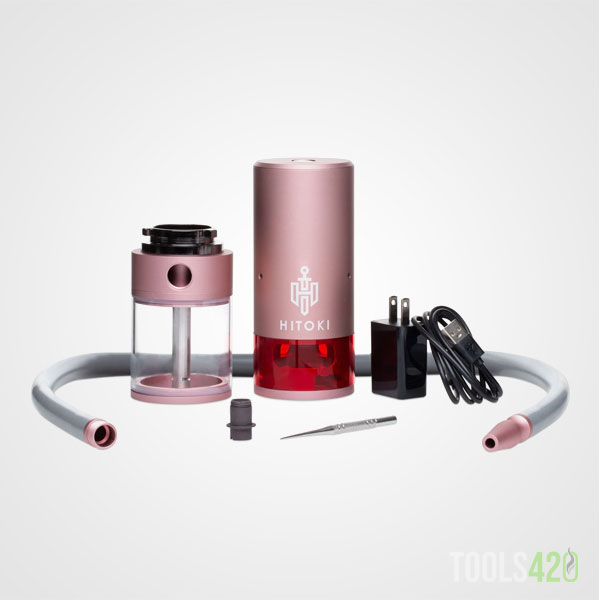 As a modern take on a bong, Hitoki sought to combine the best effects of vaporizing and combustion of loose flower cannabis that combines the big clouds and high of a torch, without the loss of flavor that a dry herb vaporizer provides. With a very bright and powerful pure light energy laser that works just like concentrated sunlight on a leaf from childhood, you’ll have access to a butane-free smoking experience that will be easier on the lungs. With a clear plastic red shield, you’ll be able to see the laser hard at work before you inhale, and overall it’s freakin’ awesome and an awesome pickup for cannabis enthusiasts.

With three laser settings, you’ll have a session for your dry herb, humid herb, and concentrate-infused herb. Hitoki suggests against using nicotine or tobacco inside the chamber, as it was designed with cannabis use in mind only.

With instant combustion, no butane, water cooling, and a long smoke pathway, there are a lot of benefits to the smoke quality that you’ll be able to get from The Trident. With the aluminum mouthpiece at the end of the silicone whip, you can be sure there is almost zero added flavor besides anything but your smoked bud. It’s an awesome upgrade to traditional combustion that offers good flavor and best of all, is windproof! 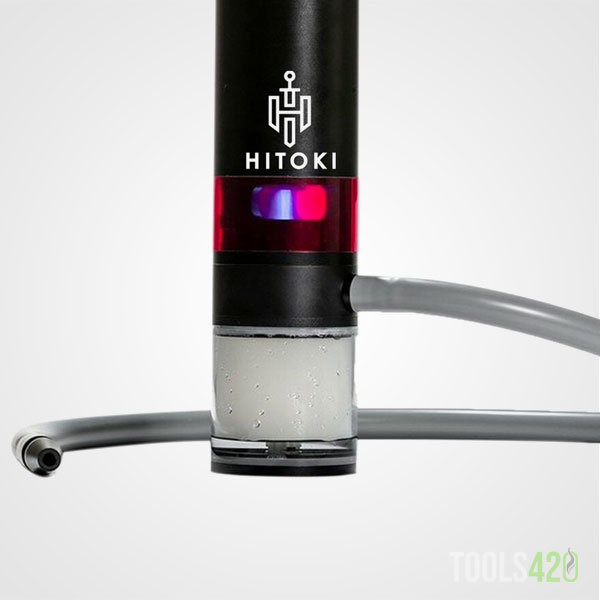 With a very powerful battery, you’ll be able to get up to 280 ignitions per charge that will last well over a week for heavy users. It comes equipped with a USB-C cord and wall adapter, so charging is quite versatile and will only take around an hour and fourty-five minutes.

How to use the Hitoki Trident Laser Bong?

For filling the acrylic bubbler portion of the Trident, you can fill it by unscrewing it from the middle portion of the Trident. Once you have the silicone hose adapter on it, you can then fill it with about a shot glass of water. Screw it back onto the body of the vape while upside down. Make sure that you don’t overfill past the fill line, or you’re going to make the draws more difficult than they have to be.

When it comes to firing the laser, you can choose to either double-tap the power button to fire it up for a nine-second run, or press and hold it for a second or two for an on-demand type of session. The press and hold option will automatically turn off after nine seconds regardless, as Hitoki doesn’t want the laser to overheat.

Breaking the laser down into three steps of operation then, all that you’ll have to do is:

With an integrated water filter/bubbler, it works by running your smoke path to the bottom water holding chamber where several air ports will release your smoke into the water, and then through the shisha whip or sold separately silicone mouthpiece accessory.

The ceramic loading chamber works with a threaded design to keep it stable when it’s, you know, getting freakin’ laser beamed and all. With a fine grind, you’ll be able to load around 0.3g or 0.4g of a fine grind into the top of it, making sure to not pack too hard or it will cover the four air holes at the bottom. In this sense, it does closely resemble the new Arizer Air Max. While the manufacturer suggests using the packing tool to make the top of the bud flat for better laser contact, your pinky will do the trick just as easily. 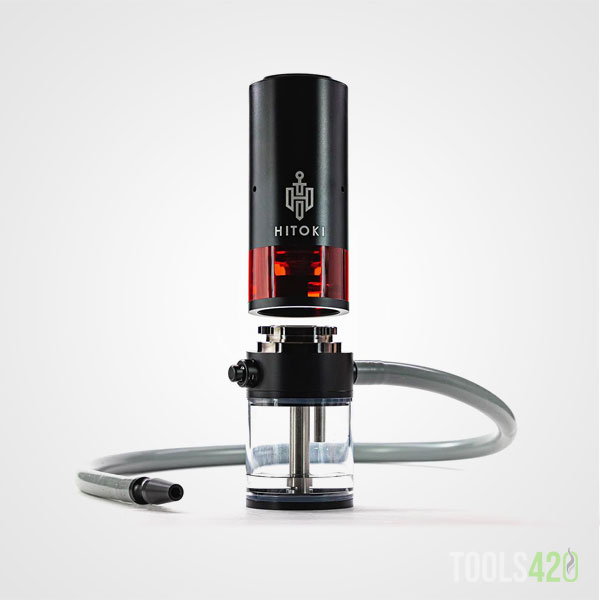 One of the benefits of the Hitoki Laser is the near-instant cloud production. You won’t have to worry about having to fumble for a laser or holding it to your bowl outside in the wind. The long air path and water add a lot of smoke cooling on their own, and if you use near-boiling hot water, the humidity will make it even easier on the throat.

How to clean the Hitoki Laser?

For the water compartment, a quick shake with some Orange Chronic Glass Cleaner will be enough to get rid of any residue. For the whip, a hot water rinse will help to keep it clean, and the ceramic chambers will be entirely clean after a quick isopropyl alcohol soak and hot water rinse.

Just like most bongs, the Hitoki Trident doesn’t take long to get dirty (individual experiences may vary depending on use…ahem). However, you will find that instead of burned bits of bud, you’re cleaning resin and fine ash. Some bongs are terrible for sucking a half-burned bowl into the water. Thankfully, this device doesn’t do that.

For the body of the laser, a quick wipe with an alcohol wipe will help keep everything looking nice and grime-free, especially the red screen which is the most enjoyable part of the Hitoki. On the upper portion, you’ll be able to see the laser lens. To keep it working its best, a vape cleaning stick wipe-down will do the trick.

Everything about the Hitoki is of high manufacturing quality, so you don’t have to worry that much about decreasing performance over time. The only thing I can’t stress enough is to keep the four air holes clear in the chamber to keep the airflow the best it can be. For this reason, heavy users will want to pick up an extra three-pack of chambers for 22 USD.

With a life span of 2500 ignitions, most users won’t have to worry about a replacement for years to come.

With either of these vaporizers, you’re going to have much less harmful vapor when compared to smoking, as you can read about more in our third-generation vaporizers blog. Not only that, but they are much more affordable, as the XQ2 costs almost half that of the Hitoki.

All purchases of the Trident come with a 6-month warranty which you can also choose to extend to three years.

With a 500 USD / 650 CAD retail price, there is sure to be some ruffled feathers whenever the Hitoki Trident Laser Bong gets brought up. For this reason, people who are happy with their normal lighter and 20-dollar bong aren’t the target demographic. This is for people who want to show off and bring some excitement to a party with a laser-powered bong with an attached shisha hose. If it’s within your budget, why not indulge a little. You’ll have access to a great bong that is sure to add a lot of fun to your sessions and will be fun to share with friends. The Classic Volcano desktop vaporizer is one of the best of its kind, if not the best. The Volcano... 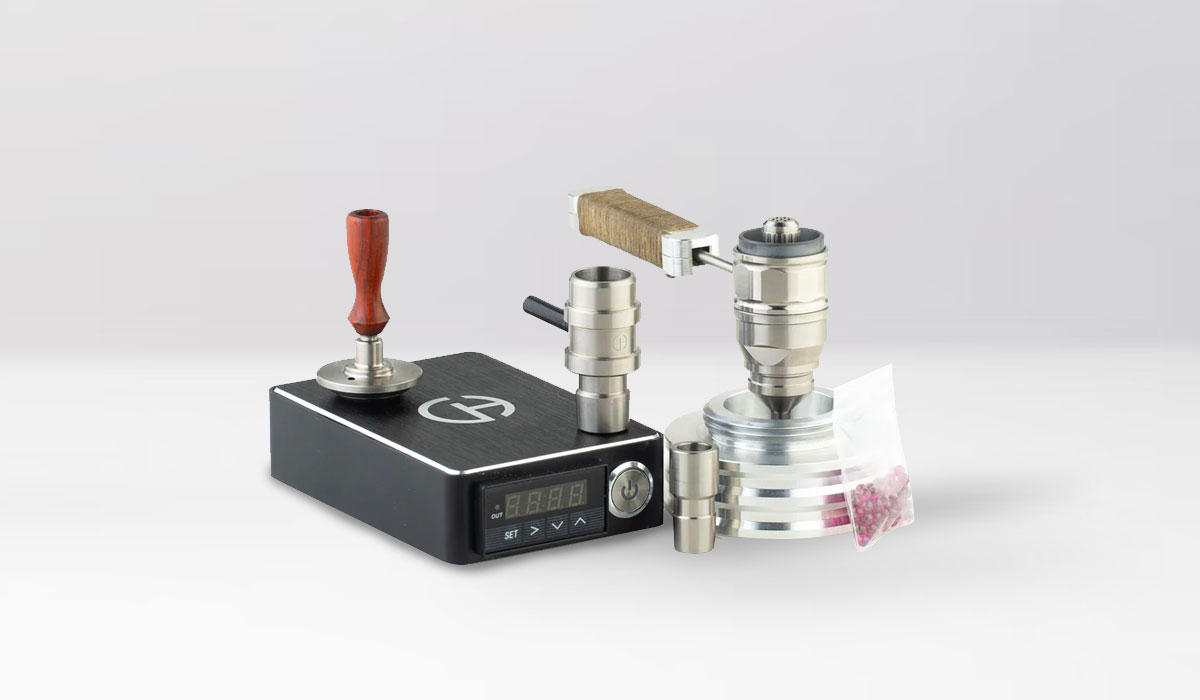 If you've been in the cannabis vaporizer game for a while, you may be familiar with the concept of... 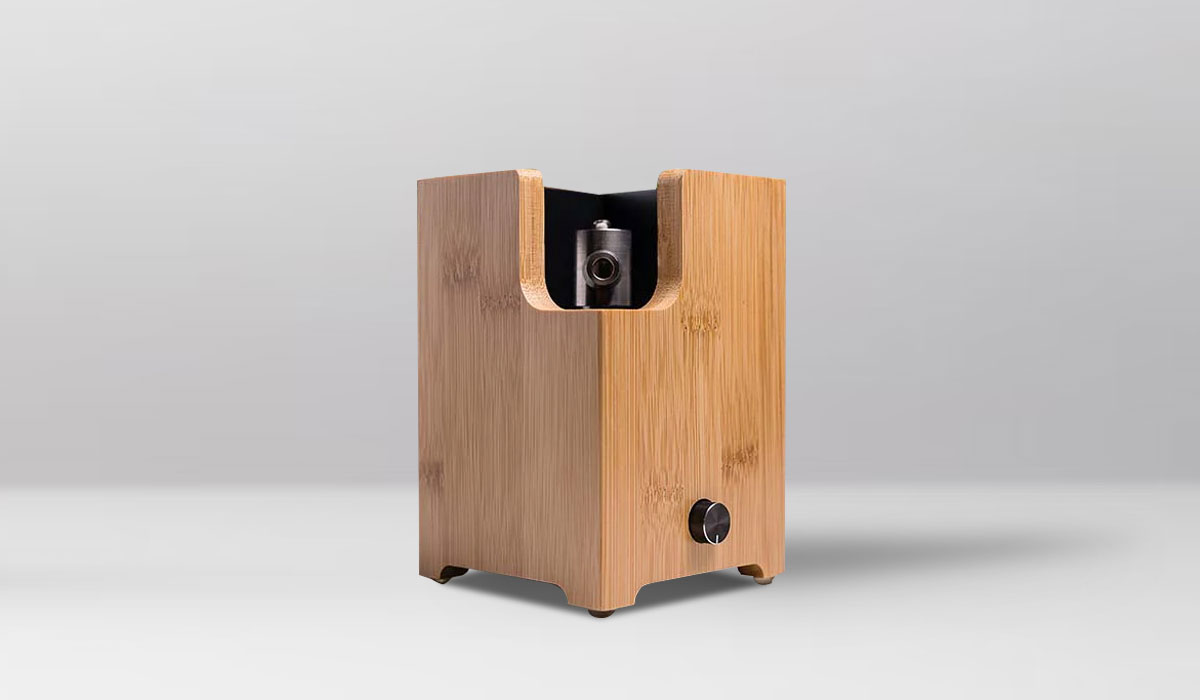 The Ditanium is one of the most interesting desktop vaporizers on the market. Made by Hardwood out... 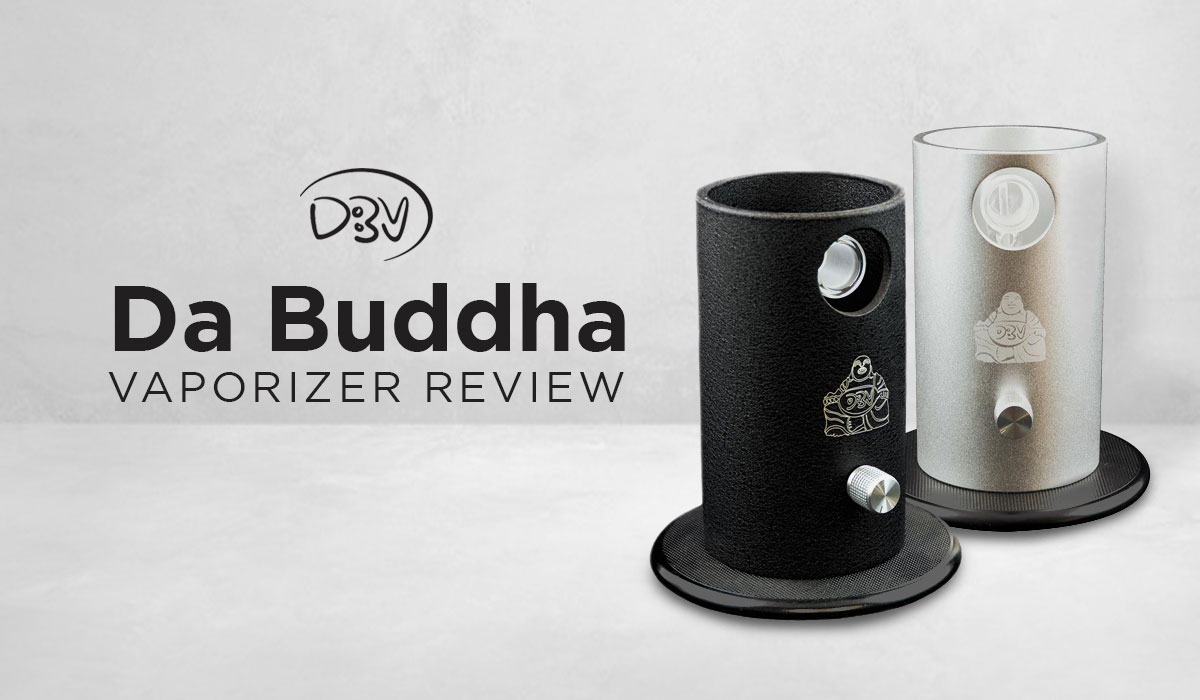 Hey everyone, Tools420 here back with another dry herb desktop vape review! Today we'll be looking...